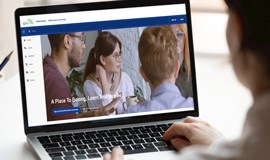 By Professor Roianne West, CEO of the Congress of Aboriginal and Torres Strait Islander Nurses and Midwives Cultural safety is a concept that has real-world implications for the health and wellbeing of Aboriginal and Torres Strait Islander peoples.

In 2020 we saw some disturbing examples in the health system of what happens when cultural safety is not practised.

During the first wave of COVID-19, reports emerged of an Aboriginal patient in NSW being refused testing because priority treatment was only given to “real Aborigines”. Another comment, attributed to a hospital employee in Western Australia, was that First Nations people only get COVID-19 “because they don’t wash their hands”.1

These may seem like extreme cases for some, but take it from me, as someone who has experienced racism throughout my life, they resonate as all too real.

After completing my nursing degree, I thought I would be exempt from racism. Not so. My qualifications were questioned and it was suggested that I could only look after Aboriginal people.

When completing my Masters, I undertook a course in reflective practice. This helped me understand where racism comes from. If people aren’t taught the true history of this country, they don’t understand the present and fall back on stereotyping to mask their ignorance and subsequent racism. They fail to realise that the lingering effects of colonisation, dispossession of country and misguided assimilation policies are reflected today in health and social inequity.

It was also in this reflective practice course that I had the opportunity to analyse two nursing cultural theories: Ramsden’s (1990) Cultural Safety Theory and Leininger’s (1978) Theory of Transcultural Nursing. Both are congruent with the development of my personal model – that is, the Aboriginal Australian Nursing Theory (Mucu-Mucucu). This resulted from critical reflexivity and deliberate conscious awareness insights from my practice and included key concepts of culture, racism and identity.

The words “Mucu-Mucucu” are from the Kalkadoon language meaning grandmother and what I have called my theory in recognition of the significant influence that she has in my life.

My most central belief of nursing still remains: That partnerships between Indigenous and non-Indigenous nurses are the cornerstone in achieving positive health outcomes for Aboriginal Australians.

Nurses, who constitute the largest percentage of Australia’s health workforce, have the greatest potential of any of the health professions to lead change in this area.

Learning more about one’s own biases and assumptions helps as does understanding how our personal and professional values and beliefs are formed. This is not new and is supported by relevant position statements from the International Council of Nurses. 2,3 I also commend to you the section on cultural practice and respectful relationships in the Nursing and Midwifery Board of Australia’s Code of Conduct for Nurses.4

A new way forward was unveiled this year with the release of a national strategy that aims to eliminate racism from the health system. It has been developed by Aboriginal and Torres Strait Islander health sector leaders along with representatives from accreditation entities, national boards and AHPRA.5

Underpinning the strategy is the principle that cultural safety is determined by Aboriginal and Torres Strait Islander individuals, families and communities. Culturally safe practice is further defined as the ongoing critical reflection of health practitioner knowledge, skills, attitudes, practising behaviours and power differentials in delivering safe, accessible and responsive healthcare free of racism.

The strategy says that to ensure culturally safe and respectful practice, health practitioners must:

A key element of the strategy is that there are lessons for the health system from Aboriginal and Torres Strait Island peoples. As the beneficiaries of 60,000 years of knowledge, we can inform better health care for all Australians.

Indeed, it is true that Aboriginal and Torres Strait Islander children, families, communities and health professionals are more likely to thrive when our unique knowledge and cultural strengths are properly recognised and respected by wider Australia, including by our non-Indigenous health colleagues and systems.

Professor Roianne West is a Kalkadunga and Djaku-nde woman hailing from her grandmother’s ancestral lands near Mount Isa. Her drive to improve Aboriginal and Torres Strait Islander health is part of a long family tradition and includes careers of nursing spanning four generations. Professor West has a twin sister and a brother who are also Registered Nurses and twin daughters who are studying nursing and midwifery. Professor West has completed a Bachelor of Nursing, a Masters of Mental Health Nursing, and a PhD which developed a model of excellence for increasing the number of Indigenous nurses in Australia. She is Foundation Professor of First Peoples Health and Foundation Director of the First Peoples Health Unit at Griffith University.